Welcome to the psychological safety newsletter and thanks for subscribing. You are amazing. This week discusses Ecotones and the Edge Effect, as well as polarisation at work, relational contracts and internal conferences.

If you enjoy reading this newsletter, please share it via your social networks and/or forward it to other people who may appreciate it! To view this newsletter and previous issues online, head to psychsafety.co.uk
I’m running a psychological safety “practice masterclass” open enrolment online workshop on the 23rd of May. Find out more and sign up here – there are only two spaces left!

And some even better news! The psychological safety online meetup is back, this time on the 9th of June at 7pm UK time. We have a fantastic speaker lined up – the incredible Kimberly Young-McLear PhD, who is going to present about diversity in the field of psychological safety. Register here!

This newsletter is sponsored by Conflux.

Many organisations today are stuck using ways of working from a bygone age. In this article, Sophie Weston, Principal at Conflux, takes a look at why knowledge work needs a new approach in which psychological safety is a key ingredient.

My first degree was in the field of ecology and environmental management, and I loved it. I learned about complex ecological systems, population health, economics and more, whilst also going on field trips to Snowdonia to climb mountains and swim in lakes. As part of that degree, I learned about ecotones. And ecotones are fascinating. 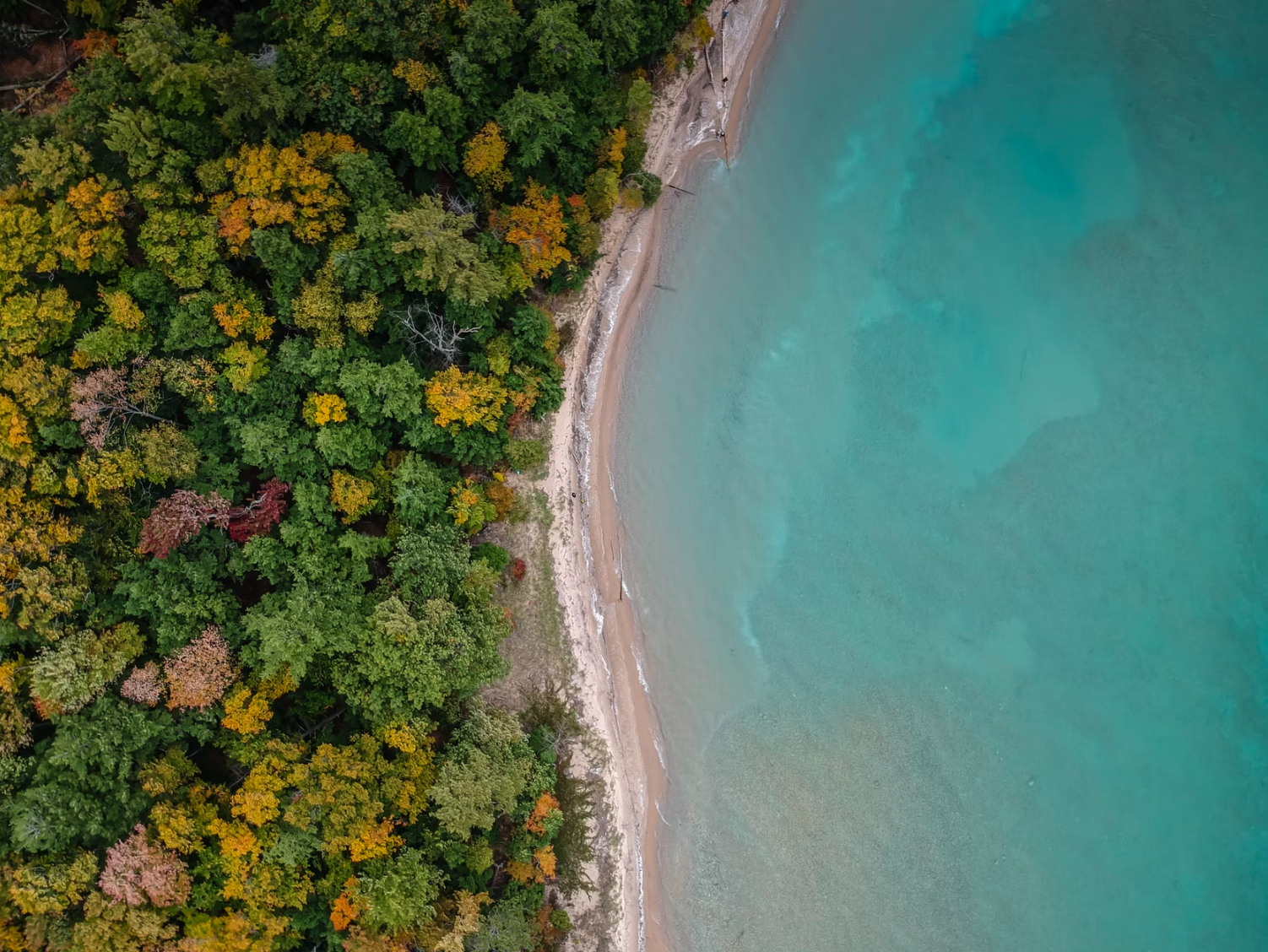 Photo by Nick Perez on Unsplash

Ecotones are where two ecosystems converge, such as coastline, the edge of a forest, or a reed bed. They are transition areas between two habitats, where two biological communities meet and integrate. The word was first coined (I believe) by Alfred Wallace, who observed the boundary between Bali and Lombok, and represents the line where the fauna on the West are Asian species, whilst to the East, there are many Australian species. This is now known as The Wallace Line. Not all ecotones are as big as this though: some may be very small and well defined, such as the boundary of your own back yard or garden, or they may be indistinct, with a gradual transition from one zone to the other – such as an estuary that gradually changes from river to sea. 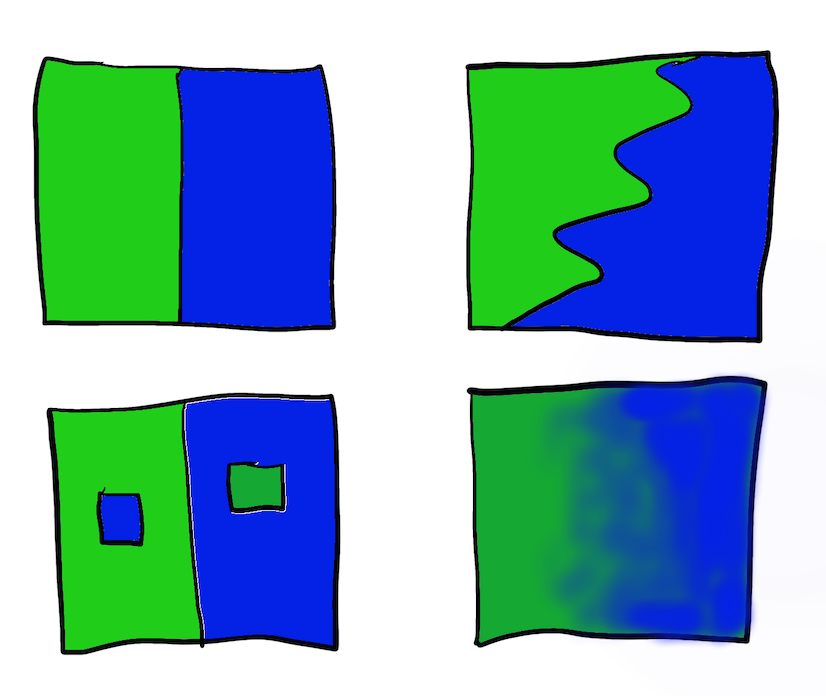 Different ecotones. (Clockwise from top left) 1 – A defined boundary, such as an agricultural field next to a woodland. 2 – A meandering ecotone, much larger in total edge length, such as a ragged coastline. 3 – Ecotones with incursions of each habitat into the other. 4 – A gradual transition ecotone, where each habitat blends into the other, and it’s not possible to define a clear edge.

Inside ecotones, we find a much higher diversity of species, as well as a higher density of organisms. You will find more birds, fishes and mammals at the edge of bodies of water than in the centre. This is called the Edge Effect and is illustrated below.

In part due to the higher density and diversity of species, and also in part due to a higher rate of environmental change and evolutionary pressure through competition, we see many more new species of plant and animal develop in ecotones. This process of new species emerging is called speciation. In the ecotone of Mbam Djerem National Park in Cameroon, scientists believe they have found evidence of speciation in progress.

Why am I writing about this? Well, just like speciation, innovation happens at the edges of organisations. Those edges might be the boundaries of the organisation, boundaries of departments or teams, or temporal (short lived) boundaries when certain events (such as conferences or hackathons) occur. The edges are where we find new ideas (products), new niches (markets), even new businesses (just like speciation). The edges are where new challenges and opportunities emerge, as well as hybridisation of two or more complementary ideas.

“Diversity leads to stability”, and this is as true in human systems as it is in nature.

Homogenous habitats are highly vulnerable to shock and change. A monocrop such as a large wheat field is vulnerable to disease and pests because every single organism is susceptible to the same threat. This is why we need to use chemical treatments for conventional crops – not because each wheat plant is particularly vulnerable to pests or disease, but because the system itself is vulnerable to ecosystem collapse. Highly diverse ecosystems can withstand shocks much better, partly through a barrier effect (as in herd immunity) but mostly because single shocks rarely affect more than a few components of the system, and the rest of the system compensates when that happens.

Exactly the same principle applies to the economic and business world. If a business focusses on a single market, a single product, or a single customer, and does not evolve, it is under threat not just from competition but from environmental shocks (such as an economic recession) too. National and global economies exhibit the same qualities: diversity endows resilience – a country that relies heavily on a single export to power GDP is highly vulnerable to economic shock. And monopolies are not just bad for consumers: they increase economic vulnerability too.

So, what can we take from this? If we want to innovate, build diversity and resilience, we should think about how to convene people across ecosystems, and combine that with a culture of psychological safety so that ideas and challenges can emerge from the safe confines of our human minds. We can create diversity of ideas, approaches, products, and even new organisations if we create more of our own ecotones inside and at the edges of our organisations.

Psychological Safety In the Workplace:

I love the way Nivia Henry phrased this on Twitter. Psychological safety is often framed primarily as a benefit for team members to be able to contribute effectively, but as a manager, a lack of psychological safety will also lead to serious consequences in your own role through poor decisions or assertions being unchallenged. Thanks Ruth Malan for the signpost 🙂

It sometimes feels like the world is becoming increasingly polarised. In the words of Frank Turner, “They’ve started raising walls around the world now… on the borders, in our heads.” The events of this week in the US have shown again how increasingly polarised discourse can make progress (particularly in respect to human rights) even more difficult to achieve. This is a very good article in HBR by Julia A. Minson and Francesca Gino on Managing a Polarized Workforce. This article reminds us to seek points of agreement and find common ground, and work from there, creating an environment of psychological safety where people can converse openly without negative consequence. Only then can we progress to solutions.

In this episode of “Jamming with Jason Mefford, Did you know vulnerability is sexy?” Jason talks with Gen and Cory from Roundtable Companies about vulnerability and creating psychological safety so you can feel free to be vulnerable, and how we all have a story to share with the world. 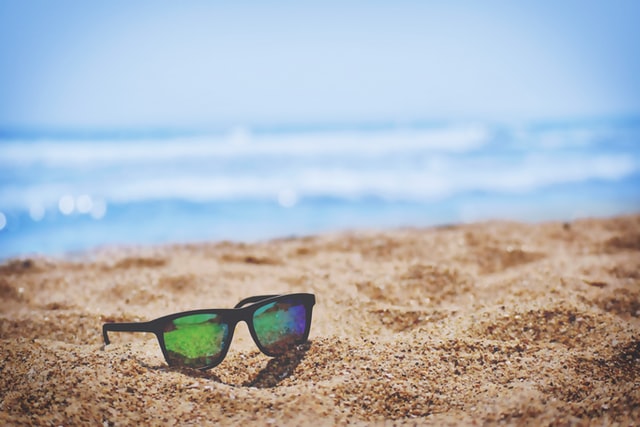 Is unlimited paid time off a good idea? Photo by Sai Kiran Anagani on Unsplash

We’ve covered unlimited paid time off policies previously, and up until reading this, I was leaning on the “this is a bad idea that sounds good” side, but now I think I’m changing my mind. This is a great article by Cheria Young: Unlimited Time Off Needs A Manifesto. Cheria suggests that the problems we observe with unlimited PTO are not an issue of vacation policy, they’re an outcome of low psychological safety.

Things to do and try:

Thinking back to ecotones, and how we can actually facilitate them in practice in our own organisations – one of the challenges we face is how to ensure that teams and people can actually work together for a common purpose, especially if those teams share different contexts, histories and cultures. One very effective way is to adopt “Relational Contracts“, which help to make explicit some of the assumptions and expectations about how we work together. Here’s a great OPL article by Stefan van Oirschot about Formal Relational Contracts, which includes social contracts, shared goal setting, guiding principles and governance.

And maybe you’re thinking about other ways to create your own ecotones in your organisation. One way to do this is by organising an internal conference, where teams from different departments and business units can meet, share, collaborate and innovate. Victoria Morgan-Smith and Matthew Skelton have just released “Internal Tech Conferences”, a great book with practical advice on how to prepare, run and follow up an internal tech conference.